skip to main | skip to sidebar

No I do not want to read your blog.

I read the above statement on a t-shirt once. I suppose an apposite response from me would be to blog about not wanting to be talked at by clothing; it never poses more than a single, intractable argument. Where's the fun in that?
With this blog entry I seek to turn what has been a much neglected repository of occasional inside jokes into a place to actually do some writing on any number of subjects. I have recently grown to take notice of the power of the written word used in daily life. For me it has been a way to organize a mind cluttered with ideas competing for attention. It's been instrumental in creating new friendships and laying thoughtful foundations for them. It has also been therapeutic to write stuff down which needs to be said, thoughts and ideas that just don't find a natural home in casual conversation.
Sometimes it feels like making a speech; all the writer can do is hope the audience enjoys listening to it. Other times, if there is a response, it can feel like a tremendous conversation, where massive fleets of thoughts and emotions embark like ships to a distant shore, and we eagerly await the visiting ships from that other land.
Another form of written communication I've grown to really love is the online chat/text message, particularly from a mobile device. It almost feels like the modern day equivalent of telepathy; transmitting a thought anytime, anywhere, to someone you know. I especially appreciate being able to share with someone at a moment's notice something evanescent which may not last through the rigors of the day.
To sum up, I enjoy writing, and since I'm too much of an extrovert to have much material to put into a private diary, I will blog instead.
Take THAT, you truculent t-shirt!
Posted by Eduardo Espada at 2:48 AM

The prize is a chance to invite the blog's author for drinks. Again. Didn't realize you'd won a prize last weekend had you? Well spotted on the duck, almost as well spotted as a bulldog. And speaking of things that should jump out at you, no mention of my apposite use of the word apposite?

Don't u mean as well spotted as a leopard? Or is there also a bulldog hidden in there somewhere? As for your flaunting your use of big words, please expedite your extramuralization (trans: get outta heah!)

Ah yes, I now remember that your illness precluded you from participating in the great spotted bulldog controversy which arose during a game of scattergories. As far as my fishing for compliments on my biggish word usage, just humor me and stop being so truculent. 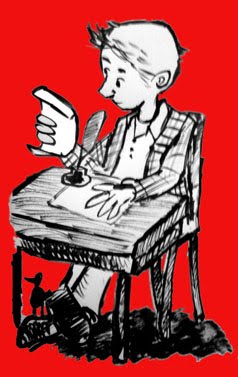 Can you find the duck in this picture?